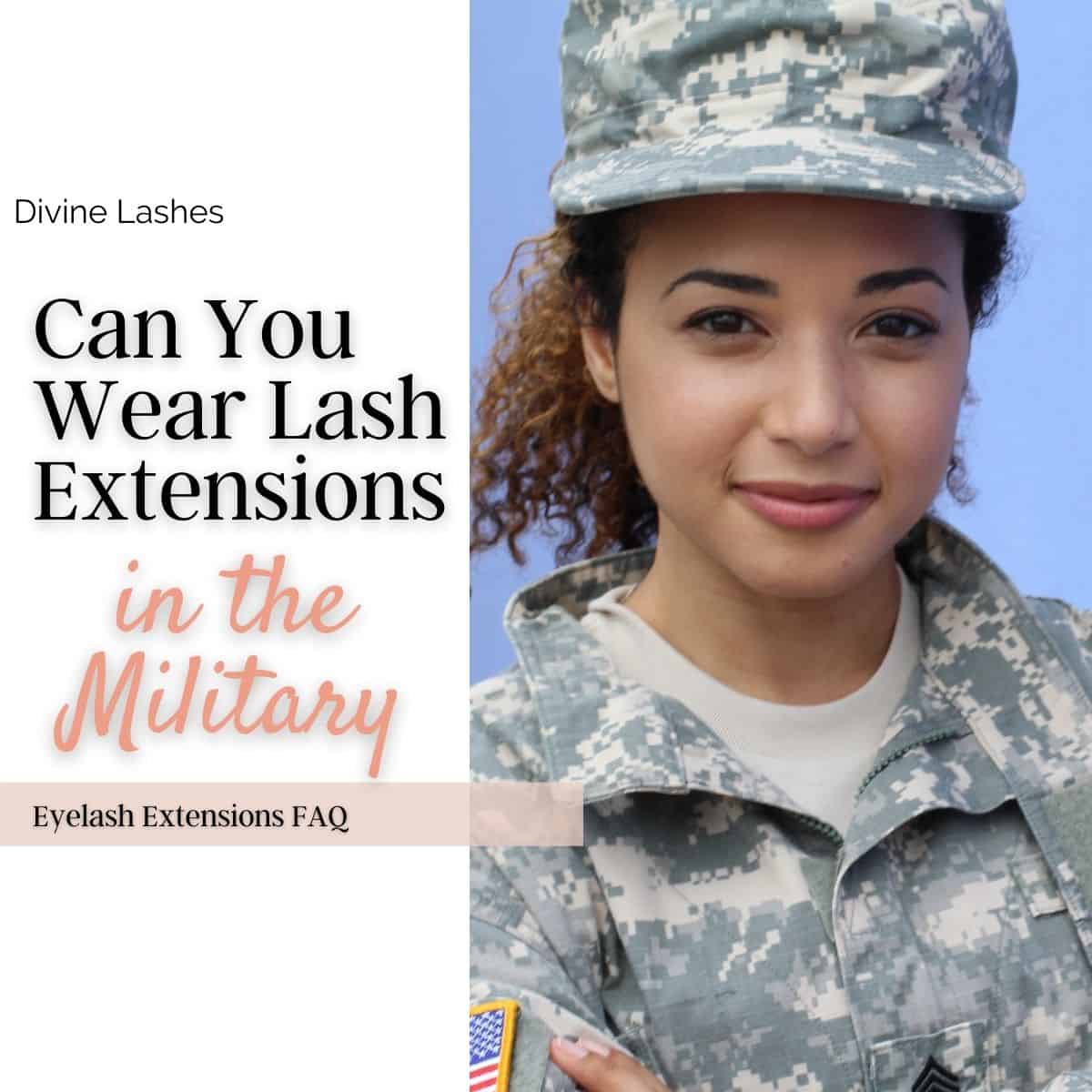 Military rules are different from civilian corporations, especially regarding appearance, including makeup. Each branch of the United States Armed Forces has its own dress code and regulations.

Eyelash extensions are not allowed in the Army as per Army Regulation 670–1. The Navy’s dress code stipulates that long false eyelashes shall not be worn when in uniform. Finally, the Air Force regulates female eyelash extensions to natural eyelash color, not to exceed 14 millimeters in length.

Read on to discover the specific rules, nuances, and regulations concerning eyelash extensions for Army, Navy, and Air Force personnel in detail today.

Are Eyelash Extensions Allowed in the Military?

Because each branch of the U.S. military has its own dress code and regulations, it is impossible to know if lash extensions are allowed in the military without looking at each military branch individually.

For reference, there are currently 6 branches of the United States Armed Forces:

In this article, I take a deep dive into whether or not you can wear lash extensions in the Army, the Navy, and the Air Force.

Are Eyelash Extensions Allowed in the Army?

The U.S Army stipulates soldiers must dress conservatively from head to toe. The code explicitly states that appearance must be natural enough not to attract attention to the soldier.

Eyelash extensions make no exception and are not authorized according to Army Regulation 670–1.[1]

I urge you not to disobey any AR regulations about fake lashes as it’s a serious offense.

Violating any specific regulations by soldiers may lead to “adverse administrative action and/or charges” according to the Code of Military Justice.

Here’s a video of a U.S Army eyelash extension wearer talking about her experience with lash extensions in the army.

There are two reasons or situations where you would be allowed to wear your eyelash extensions in the Army.

According to the new AR Regulations 670-1 released in January 2021, “Eyelash extensions are not authorized unless medically prescribed.”[1]

As for the medical reasons for allowing eyelash extensions in the Army, this is a matter of discussion between the soldier and their doctor.

Once you have a medically valid reason, I suggest you also talk with your superior officer regarding the medical obligations to get approval.

Army personnel interested in eyelash extensions can wear them when not on duty.

Flaunt your beautiful lashes all you want during vacations!

That said, be prepared to let them go when you’re joining back on duty. And history shows once you get hooked on lash extensions, it’s hard to bid them goodbye. True story!

Are Eyelash Extensions Allowed in the Navy?

Yes, you can wear lash extensions in the U.S Navy, provided they aren’t too long.

According to the personal apperance regulations in the Navy, “Exaggerated or faddish cosmetic styles are not authorized with the uniform and shall not be worn. Care should be taken to avoid an artificial appearance. Long false eyelashes shall not be worn when in uniform.”[2]

But make sure your false lashes look modest and natural besides matching your natural features. So, loud, fancy, and outlandish styles must be strictly avoided.

If you don’t adhere to the rules, severe punitive actions may be taken against you.

Are Eyelash Extensions Allowed in the Air Force?

Although the United States Air Force didn’t allow eyelash extensions a while ago, the new regulation published on Dec. 4, 2021, now allows them.

According to AFI 36-2903, “Department of the Air Force guidance memorandum regulates female eyelash extensions to natural eyelash color, not to exceed 14 millimeters in length.”[3]

So, both the Classic eyelash extensions and the Natural Sweep styles fit the dress code.

Pro Tip: Check out my article if you want to know more about the different extension styles that would best fit your eye shape.

The U.S Military has many rules in place regarding hair and facial makeup because military personnel shouldn’t attract unwanted attention to themselves.

The goal is that soldiers in uniform must look uniform too.

Semi-permanent makeups like eyelash extensions aren’t allowed at all in the Army when on duty.

However, the regulations about eyelash extension in the Navy and Air Force are slightly different. You aren’t allowed to wear long eyelashes in unnatural colors in the Navy. On the other hand, the Air Force allows lash extensions of lengths up to 14 mm.

In any case, falsies aren’t a good choice for military personnel because they always look unnatural. However, classic eyelash extensions are carefully attached to match the wearer’s lashes’ natural curl, length, and thickness. They can look gorgeous, natural, and modest too!

For example, this classic natural full set enhances the natural lashes and results in a very natural-looking set of lashes.

It is important to understand the differences between falsies and eyelash extensions when making your decision. Falsies will generally look more fake than extensions.

In case of any doubts, consult your superior officer before going for a specific style of lash extensions. This way, you won’t be penalized if your lash extensions aren’t appropriate.

Life Is Short, Your Lashes Don’t Need to Be

Sign up for exclusive insights, tips, and tricks for long eyelashes to fall for!
100% free. Only the good stuff.

Asako has been passionate about lashing since 2012. She rapidly gained recognition for her excellent service and state-of-the-art technique. She continuously increases her knowledge both as a technician and educator by collaborating with top lash artists worldwide.

When away from the salon, Asako loves to stay active either at the gym or enjoying the outdoors. She loves to try new recipes and spend time with her little boy and baby daughter.

Asako (left) and Naoko (right) are certified lash stylists and the owners of Divine Lashes – a site for lash lovers to come together and learn more about eyelash extensions and lash lifts. We share our passion and knowledge about anything eyelash-related on our blog which now receives more than 1 million yearly visitors!