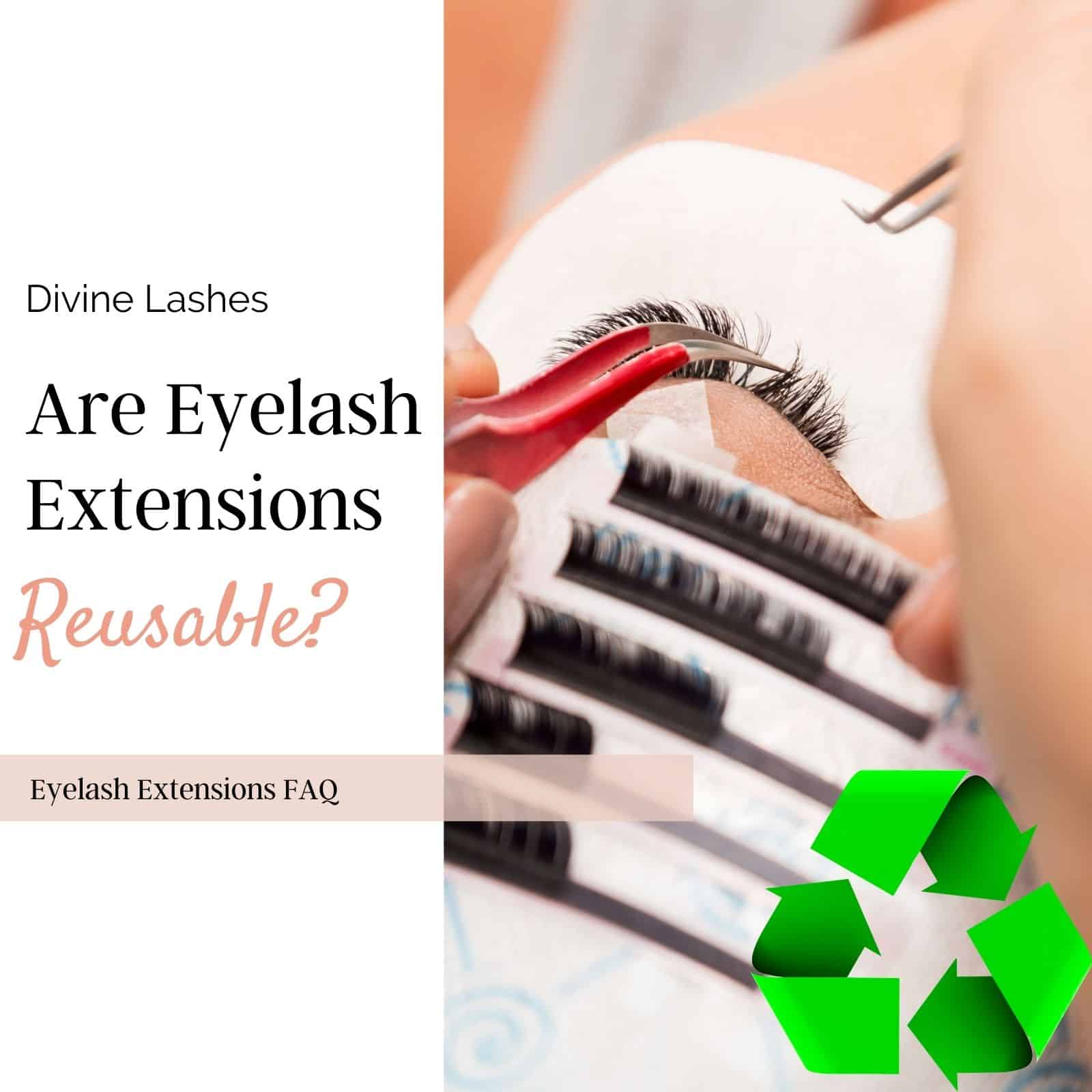 Read on to find out which type of false eyelashes can be reused and why can’t lash extensions be reused. You’ll also learn how to extend the lifespan of your fake lashes to prevent them from shedding prematurely.

Why Are Eyelash Extensions Not Reusable

There are 4 reasons that explain why eyelash extensions can’t be reused:

Impossible to Collect Them

Eyelash extensions aren’t removed at the end of the day. They fall out gradually with your natural lashes within two to four weeks. That’s why a majority of lash extension wearers book refill sessions in three weeks (check out our research on how often clients come for lash refills here).

This doesn’t mean all eyelashes shed at the same time. In fact, most eyelashes fall off at different times and you can lose one to five eyelashes per day throughout the growth cycle.

Most people go about their day and never notice when they shed an eyelash. That’s why you can’t go around collecting lash extensions that keep falling off your eyes. You would be lucky to catch one or two eyelash extensions at most!

When a lash extension is applied to your natural lashes, a specialized adhesive is used. That’s why if you decide to remove the lash extension prematurely or catch a fallen one, cleaning up is a daunting task afterward.

From the remnants of glue to dirt, dust, and grime, there are many things that can creep into an eyelash extension. Because eyes are unbelievably sensitive to infections, you need to use clean and hygienic makeup products to avoid medical problems like dryness, swelling, redness, and conjunctivitis.

Eyelash extensions are semi-permanent and can last several weeks. With natural wear and tear, lash extensions eventually get less fresh than their brand new counterpart. In fact, when you’re rubbing, washing, sweating, cooking, cleaning, sleeping, bathing, and doing other activities while wearing extensions for weeks, it often loses its initial integrity.

After the lash extension sheds with natural eyelashes, some of the integrity of an extension goes off, unlike a brand new one. Besides cosmetic reasons, a reused lash extension might have a lower lifespan too.

You don’t need to reuse lash extensions to make it worthwhile. It stays for weeks on end and not just for a few days like strip lashes. Once it falls, it no longer behaves like a new lash and thus offers the least value for money.

The real value of lash extensions is not the material per se, but the very precise and qualified professional work required to apply them.

How To Make Your Lash Extensions Last Longer

When you get an eyelash extension treatment done, the lash tech carefully chooses extensions that complement your natural lashes. The technician often picks a lightweight option that mimics the shape and size of your natural lashes. Going for such a natural look also brings the amazing advantage of retention.

Instead of reusing lashes, you can always extend the retention of lash extensions on your own too. What are the ways you can ensure your lash extensions stay for a long time? Let’s figure it out!

The best way to increase the retention of your lashes isn’t keeping them off water forever, but cleaning them daily. While it’s true that you shouldn’t touch water on your lash extensions for at least four hours after the treatment, lack of cleanliness ultimately can lead to lash mites.

It’s important to clean your eyelashes at the end of the day with an oil-free lash cleansing solution to remove the dust, dirt, and grime sediment on them. Once it air-dries naturally, make sure to comb and brush your lashes using a mascara wand.

When you’re showering with eyelash extensions, there are a few things to extend the longevity of your lash extensions. For starters, warm water is good but hot water isn’t.

You should avoid letting the water from the shower fall on your lashes at high pressure. Don’t scrub around your eyelashes harshly too. Instead of washing your face (and lashes) in the shower, you could do so at the sink.

If you’re a fan of baths, skip out on the bath salts and oils when wearing extensions.

Getting good quality lash extensions isn’t enough. You need to take care of it properly too. Avoid fidgeting or rubbing your eyes harshly as it can cause extensions to fall out sooner than later. Another cause of the premature falling of fake lashes is heat. That’s why using hairdryers on a hot setting is a big no-no too.

Lastly, avoid salt in cosmetics and skip out on swimming in the ocean for prolonged hours for the same reason.

You must actively avoid oil makeup products around the eyes as it can degrade the bond created between eyelash extensions and natural lashes. It’s especially important to look for water-based and not oil-based products for use around the eye because oil and salt can disintegrate the lash adhesive.

When you’re removing makeup, stick to lint-free material instead of cotton pads to avoid pulling and snugging on lash extensions. You should also keep away from waterproof mascaras and eyeliners as they make removal difficult for eyelash extensions.

For starters, avoid cotton, polyester, and other similar pillowcases that can pull and snag your lash extensions while you’re asleep. Instead, sleep on a silk pillow because it doesn’t create friction.

Another alternative is to sleep on your back instead of your stomach to prevent pressing your fake lashes.

Which False Lashes Are Reusable

Not all types of false lashes are made for the same purpose and from the same type of materials. We have already stated that eyelash extensions are not reusable, but what about strip lashes and cluster lashes?

It is important to know that false eyelashes are generally divided into three main categories:

Strip lashes are temporary and daily-use lashes made to be applied and removed in one swift motion. Like the name implies, strip lashes are lash fibers that are attached to a band that is then glued to the skin above the lash line.

Strip lashes made of synthetic fibers can be reused up to three times if you clean them well.[1] Mink falsies, on the other hand, can be reused 20 times with thorough aftercare.[2]

On the other hand, strip lashes with self-adhesive bands are disposable and should not be reused.

Lash extensions are not reusable. They are sequentially applied one by one to natural lashes using a specialized lash adhesive. The extension falls out when the natural lash on which it is attached sheds which may take a few weeks.

In most cases, you will not even notice the loss of an eyelash.

Even when a lash tech makes a mistake with a lash extension, the used lash extension almost always goes to the trash rather than being reused. You can clean and reuse mascara wands but lash extensions are always applied fresh and out of the lash tray.

When it comes to false lashes, some can be reused and others can’t be. Individual and cluster lashes aren’t like strip lashes. Eyelash extensions are attached one by one to your natural lashes. Hence, they don’t come out together.

The real value lies in the skills required to apply eyelash extensions. That’s what you pay for.

Instead of reusing eyelash extensions, you can increase the retention capacity by taking care of them. Make sure to clean them regularly so that dirt and dust don’t get trapped between them. Don’t scrub them when showering or otherwise and avoid oil-based and salt-based makeup products.

You should also invest in a pillowcase made of soft material such as silk or satin to ensure lash extension don’t pull, snag, or tug on the bed while you’re asleep.

Finally, it’s important to select a good lash tech who picks the right lash extensions for your eyes by their weight, size, curl, length, etcetera so that your natural lashes can hold them for the longest time. In short, strip lashes can be reused a few times but lash extensions can’t be. The latter is made for a single-use that spans over a month.

Still doubtful about the reusability of lash extensions? Share the name and type of fake lashes you’re confused about in the comments below and I’ll get to back to you. 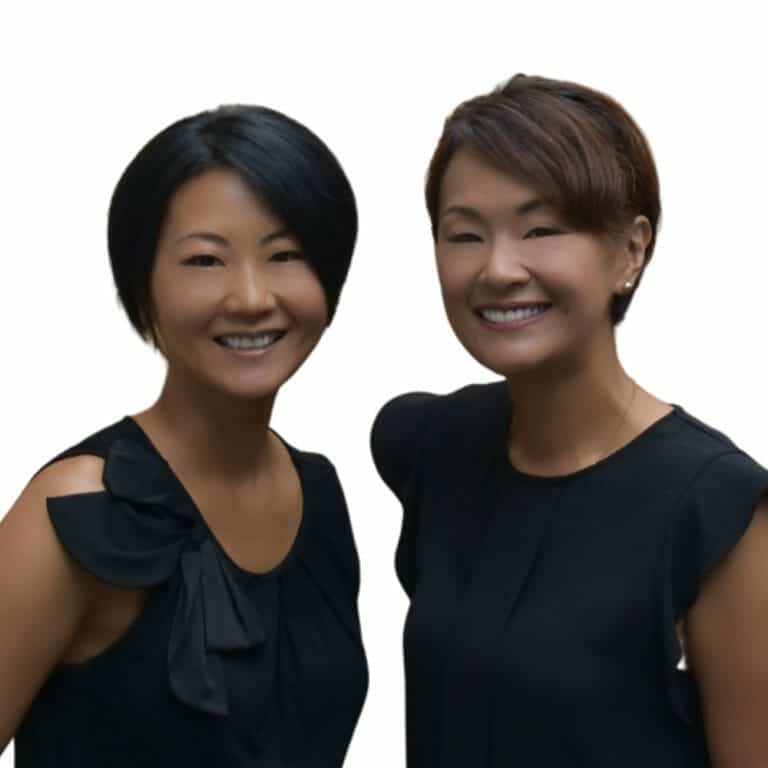 Asako (left) and Naoko (right) are the owners of Divine Lashes – a site for lash lovers to come together and learn more about eyelash extensions. Ever since we started the business in 2008, we've loved every minute of the journey.  Hopefully we can make you love lashing as much as we do! 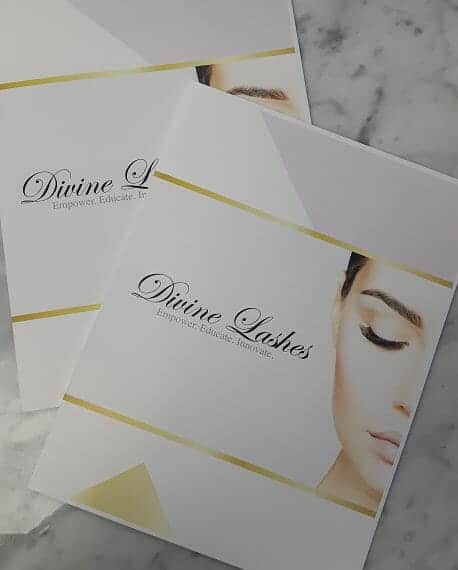 Divine Lashes is accredited by the government of Quebec as an educational institution. We offer comprehensive classic and volume eyelash extensions courses designed to equip you with the right knowledge, technique and skills to become an elite eyelash extension stylist.

Visit our training page to learn more about our courses.