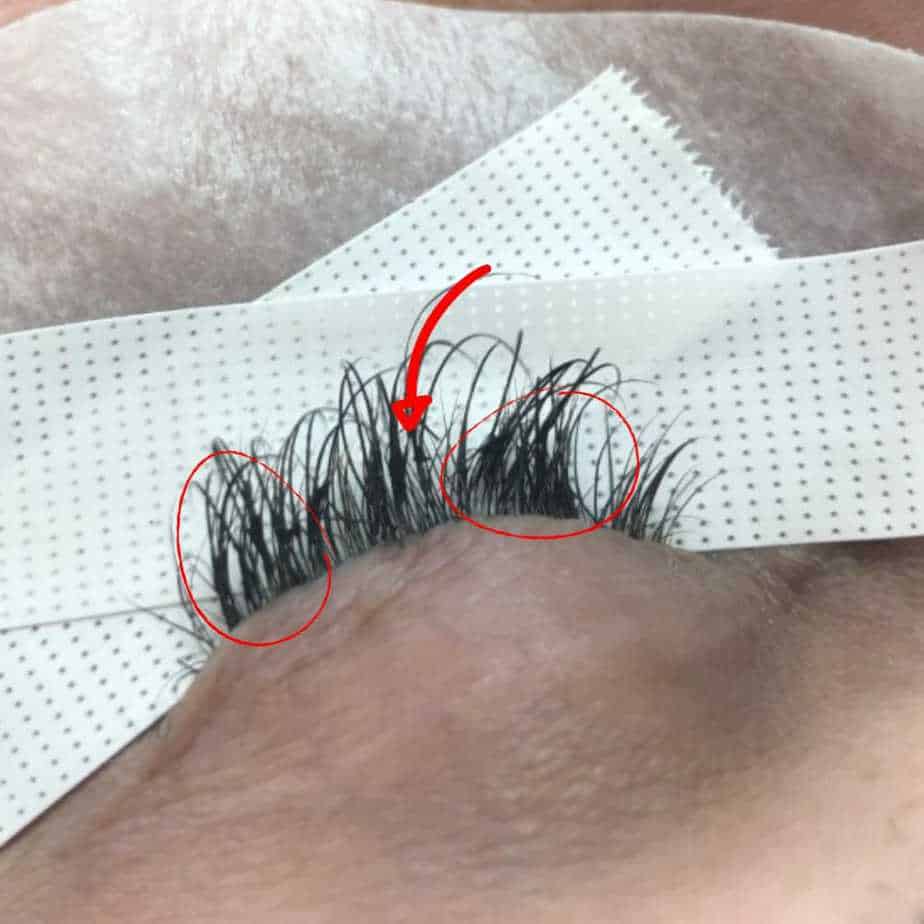 During the year we have many clients who travel and take extended vacations. This client went on a road trip across Canada, and then to her cottage out in Ottawa. By the time she was scheduled to be back, she was hitting her six-week mark, which is the timing for a new set at Divine Lashes. She decided to get a fill at a well-known spot in Ottawa.

This is when a lot of lash crimes happen… Extended vacations and business trips; we get it you need your lashes.

When she returned to Divine Lashes she advised that something was bothering her, and the extensions tugged a lot… This is what her lash tech found:

The area circled closest to the left is a sticky with all mature Lashes. Luckily, her lashes grew out at relatively the same time… However, there is lack of baby lashes. This client’s lashes are usually very thick, and very full. She could easily wear 120+ extensions. You can also notice pretty sparse areas on each side of this big sticky. Next, the arrow is pointing to another big sticky- this sticky alone took almost ten minutes to pick apart and remove. It was a huge clump of glue on many natural lashes and extensions…

In the next circled area you can see two things:

Both of these could have been the main reasoning for this client feeling discomfort. As mentioned in Lash Crimes Part One & Two, a nail head is when an extension is glued to the skin. A sticky is when two or more extensions or natural lashes-or both- are glued together. Lifted extensions, which is something we haven’t spoken about in detail, is when the extension is not levelled onto the natural lash. A lifted base literally means the base of the extension is lifted, this can cause a poking or pinching feeling- especially when you blink.

This is her other eye, the horror continues! The first highlighted area closest to the left shows three stickies, which have many lashes stuck in each. You can also notice a lack of baby lashes… The arrow is showing another nail head. Seeing the same mistakes on both eyes means that the eyelash tech is completely aware that her work was not proper.

Sometimes, eyelash extension tech’s don’t know better because of their training. With new techs, sometimes they catch their mistakes and learn from them. However, seeing how improper applications were on both eyes, with many of the same mistakes… This makes me believe that they eyelash tech that did this to the client’s lashes are fully aware of her application and doesn’t care.

The last circle is showing a whole chunk of lashes that are glued together. This sticky took up some time to remove. Extensions were glued to lashes that had other extensions glued to them… It was a mess. This client was recommended a removal and fresh set because there was a difference in her natural lashes once the Divine Lashes Artist was able to separate and remove all her extensions.

This happened in July – August 2019, and in early 2020 is when her lashes fully recovered! That’s a five to six-month recovery!

Life Is Short, Your Lashes Don’t Need to Be

Sign up for exclusive insights, tips, and tricks for long eyelashes to fall for!
100% free. Only the good stuff.

Asako (left) and Naoko (right) are certified lash stylists and the owners of Divine Lashes – a site for lash lovers to come together and learn more about eyelash extensions and lash lifts. We share our passion and knowledge about anything eyelash-related on our blog which now receives more than 1 million yearly visitors!